JOURNAL – Pearls and the Ama-san

The pearl, in my opinion, is the most feminine, elegant and beautiful gem known to man. Unlike its counterpart, the precious and semi-precious gemstone, the pearl is not mined by men, cut and set by, mostly, men, it is harvested from sea beds, hidden in oyster shells by female divers, traditionally and historically by the ama-san, literally translated from Japanese, meaning sea woman.

This fascinating tradition dates back to as early as the Heian Period, 927AD. Not very much was documented about these women, which gave rise to local legend. They were also known as mermaids of the East. These women were mostly married to fishermen and lived in coastal areas and islands. They dived for shell fish and presented this, along with prized abalone, as offerings to shrines and emperors. There are various reasons that this was a predominantly female activity, one being, that women have an extra layer of fat, which protects them from the cold water. (I knew I would one day discover a good reason for this).

The traditions and training were passed down from mother to daughter. Considering the patriarchal Japanese society, the independence and self sufficiency of these women is quite astounding. They were considered to be the physically strongest female figures of Japan, remaining in good health with many divers diving well into their 80’s. 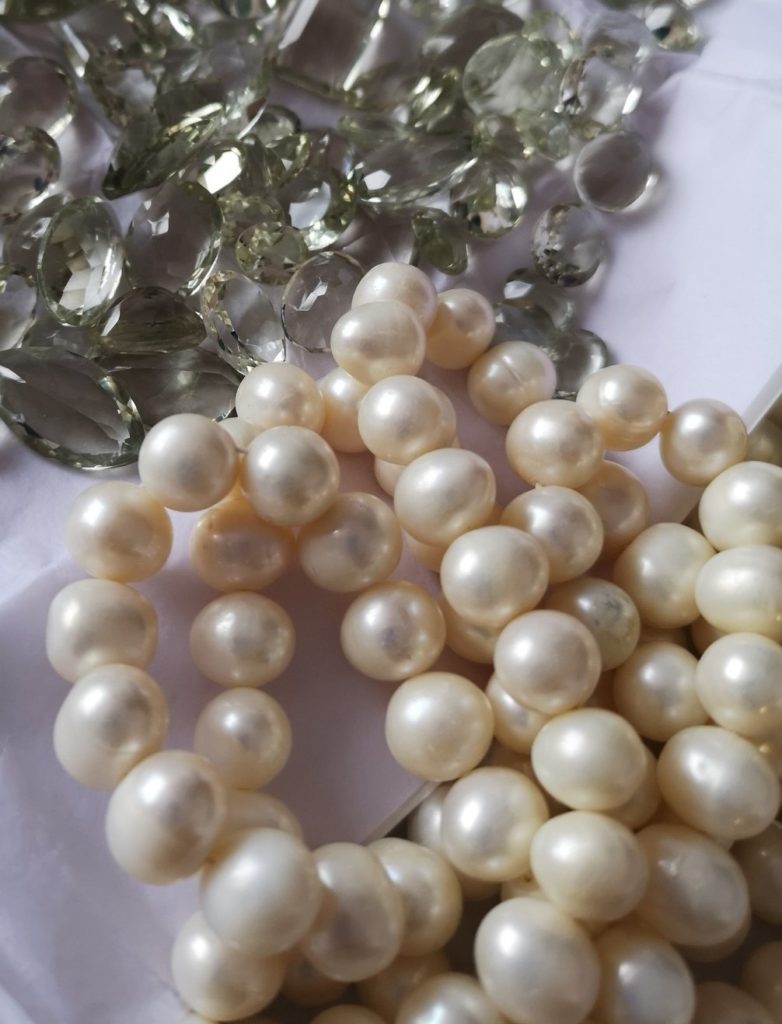 Finding natural pearls in mollusks were considered a blessing and it was only in 1878 that Kokichi Mikimoto introduced the cultured pearl. I never knew the difference between a natural and cultured pearl until I was older and after my mother had visited one of Mikimoto’s farms in Japan. It is a simple yet fascinating process.

Natural Pearls are formed when an irritant, often a parasite and not the proverbial grain of sand – finds its way into an oyster, mussel, or clam. The mollusk, trying to expel the irritant, excretes a fluid that coats the irritant. Layer upon layer of this coating, called ‘nacre’, is deposited until a lustrous pearl is formed. A natural pearl of value is found in less than 1 in every 10,000 wild oysters.

Cultured pearls are grown on pearl farms, mollusks are raised until they are old enough to accept a mother-of-pearl bead nucleus. Through a delicate surgical procedure, the technician implants the bead and then the mollusks are returned to the water and cared for while the cultured pearl forms.

Saltwater pearls are typically formed in akoya oysters grown in Japanese and Chinese waters. They range in size from 2mm (tiny) to 10mm (rare) and are usually round, white or cream coloured. Australia, Indonesia, and the Philippines produce the South Sea pearl – the largest of all the pearls. They range in size from 9mm to 20mm and can be naturally white, cream, or golden in colour.

Tahitian pearls are interestingly not exclusively from Tahiti – they’re grown in several of the islands of French Polynesia, including Tahiti. Their typical sizes range from 8mm to 16mm. These naturally coloured pearls are collectively called black pearls, but their colours include grey, blue, green, and purple.

Fresh water pearls are grown in freshwater lakes, rivers, and ponds, predominately in China. Although many are white and resemble the akoya cultured pearls in shape and size, they can also be produced in various shapes and in an array of pastel colours.